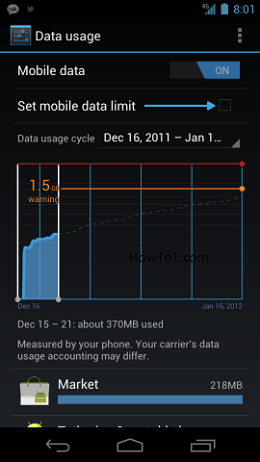 The ability to monitor data usage and in some cases automatically turnoff mobile data are provided by ICS to users.

With Android 4.0 monitoring the mobile data usage is just a piece of cake. Here is how it’s done.

First open the settings app and then select Data Usage, now you’ll access the Data Usage settings screen. One navigating through the screen you’ll see something similar to the screen above.

The data usage is represented by the orange bar on the graph with which you’ll receive precautionary warnings. By sliding the bar up and down you can adjust the warning level.

The dotted line going across the graph shows the current usage.

The data usage of apps and tasks may vary. So if you want to find the app or task which uses most mobile data, an app list is there, in which data usage by each app is given.

Each app has a particular data usage graph, to see the graph, just tap on the app on the list.

There is an option to monitor the Wi-Fi data too. To view Wi-Fi data usage tap on the menu and Show Wi-Fi usage box.

There is a chance of occurring variation between data usage shown in the device and the monthly carrier usage report, the device will remind you this several times .So in order to stay out of trouble as a precaution it’s good to set the warning levels lower than the true one.

Advices while move on to a chromebook