To start with, I would never, not even in my wildest dreams recommend you to avoid or neglect an Antivirus software to boost the speed of your PC. The reason is that sans the Antivirus software, you have no existence, to be more precise, your PC will cease to exist as it used to. So what we will try to discuss here is simply to let you know about something related to this topic. 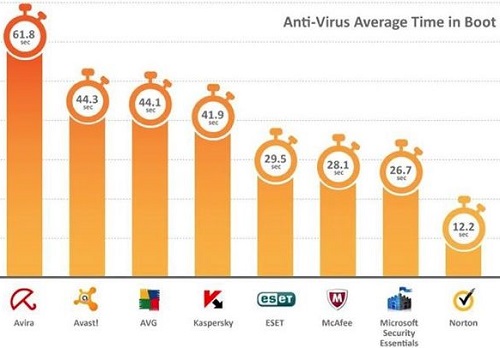 You do know that once you run softwares and what I mean is those heavy ones, your PC’s performance will dwindle. The results would be so drastic if your system is not a new one. Well you might know this for a fact. But what you need to know in this respect is that not only does is reduce the speed of the PC but it also prolongs the PC boot time,which you will not like to have .

What is new is that you had absolutely no way to find out exactly how much time would be increased till now. There has been a number of queries by interested users who wanted to know the time more precisely. Also it was extremely hard to predict the said amount of time without the exact set of variable at hand. So it was well-nigh impossible for almost every users .

But now there is some happy news for all of you. The thing is there are some softwares which will let you know exactly the amount of time that your system will use due to the workload exerted on it by the antivirus software. One of the best services in this regard is Soluto which will let you know this time-frame and that too with the aid of sophisticated tools like graph and what not! So give it a try at the earliest.

How to add and manage useful Apps in Word 2013

How to be careful about RAM Disks