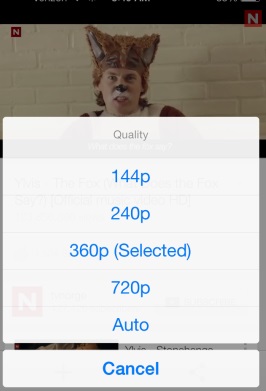 It is a basic fact that the more control that we get for tech goods, the more satisfied we are. This is the exact principle that underlines one of the latest updates from Google for the YouTube app for iOS that was released recently. On the first look, I was of the opinion that this was another boring update without nothing much in it for the user to rejoice. But then after a closer analysis, there is  big happy news for me as well as for every other user of the app.

Now you will get the ability to adjust the quality of the video that you wish to watch. Now this is no small thing as till this update was rolled out, the quality of the video was just not in the user’s control, it was completely controlled by Google and hence this has been welcome new for one and all is the least that I can say about the new update.

Now here is the deal. First of all, it goes without saying that you will have to update the app and once you have updated the app, you will be able to control the quality of the video by way of a set of new interface that you are provided with. The new thing is that you will see a button, quite small and then you will also see three dots placed vertically in the video playback controls.

While playing a video, just click on this button and then you will be provided with three options. The first one is video quality and then the second one being closed captioning and the last option is flag as inappropriate. Now once you have gone for the video quality option, you can select a video quality that is listed there as you wish and that is it.

How To Hide Google+ Profile

How To Upload Videos In Google Plus